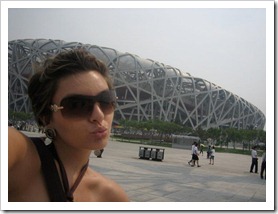 I have lush memories of Olympics past: saving Tropicana barcodes to exchange for a Tyvek jacket during the Atlanta games and hopping in and out of the swimming pool to watch the US team dominate in another pool in Athens.

Conversely, this summer I’ve watched bare-bones coverage and still I’ve managed to see redundant reports. (I suppose when one network buys the exclusive rights to broadcast, their only mission is to loop highlights until the viewer is as exhausted as the athletes. Although, according to my Facebook feed, others around the globe are mesmerized by the coverage and so its certain NBC has recouped their $1 billion and then some.)

I can attribute my 2012 Olympic fatigue to many things: (1) London doesn’t thrill me as a city, especially coming off of the high of Beijing and the newness and controversy surrounding those 2008 games (photographs from my trip in 2009, above+below); (2) the stadium is ho-hum with its saving grace being the fact that it may be disassembled post-events as the city knows it

will never see a crowd like this again.  While this may be admirable, the project costs certainly weren’t and Athens had the whole lot of them beat when the ancient city decided to reuse existing buildings and focus instead of infrastructure that serves its people daily, nearly a decade after its inception.  And, in the laudable opinion of this architect-to-be, the Birds Nest and Water Cube are simply stunning, albeit choked in a thick layer of coal dust and sand from the Gobi desert.

(3) While the US Woman’s team climbed to the top of the podium, the chatter about Michael Phelps not training as hard and needing to retire nauseates me. Sure, he screwed up his finish in the 200 Butterfly like only a novice should, but last time I checked, being the second best swimmer in the world wasn’t the worst rung on the ladder of success.

(4) Have you seen the plans for the Olympic Park? James Corner, the landscape architect behind NYC’s revered HighLine project, must have given the renders to an employee returning from a Disneyland vacation. I’m curious if all those pink trees will come to be? Are they cherry trees growing haphazardly in a field of lime-colored “native flora”? I hope they’re made of cotton candy.

I suppose when you have a memorial rollercoaster monstrosity to compete with, Disney-fying London is the answer 😦

***Disclaimer*** The photo above is of my younger brother, not Phelps or Locthe, and at the tender of age of 17 is super tall, super dark and super handsome in his Gator swim cap. He is competing in the butterfly leg of the 200IM at a local swim meet in New Jersey. I use the word ‘competing’ loosely, as you can see, in the first stroke he has eliminated the competition!

Photo credit to my dad and his super fancy camera and lenses!