Cleveland has suffered the brunt of many jokes, most of them with great historical accuracy. Yes, our river did catch on fire, but you know what, we took burnt trash and turned into a summer festival (poster at left) and great tasting beer. Well, not literally, but Great Lakes Brewery’s Burning River is quite the refreshing drink.

Despite decades of activism, Lake Erie is still ripe with high bacteria counts and more visible pollutants like tampon applicators, diapers and cigar tips. While it’s difficult to make out chunks of said items floating along from the bluffs above the lake, a trip down to the sand will have you shoveling trash for a few minutes before you feel safe putting down your towel.  It’s a terribly sad state; what’s more sad is that many people do nothing but complain.

However,  with the combined efforts of the Sewer District, the local CDC and groups like Alliance for the Great Lakes in support of the newly launched Urban Beach Ambassador’s program, the water quality of Lake Erie is on its way to healthy levels, even after a rainfall event.

These groups and individuals are passionate about the water quality of our north shores and advocate for awareness through events like this past Saturday’s Beach Blast held on Euclid Beach, former home to the Euclid Beach Amusement park and a great, if not largely undiscovered destination.

The second annual Beach Blast combined the creativity of neighboring artists with locals’ passion for one of the region’s best resource. 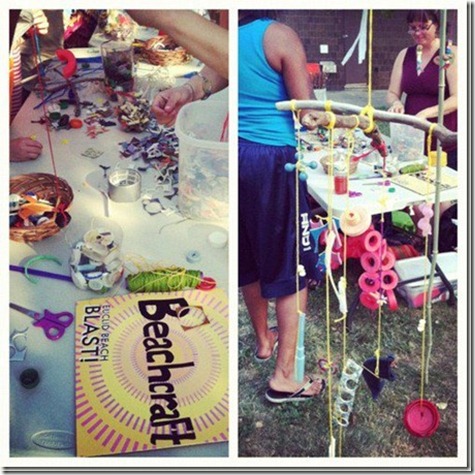 BeachLab, an interactive aspect of the Blast demonstrated to beach goers the varied potential of the park’s vast property while a masterplanning proposal from MKSK (out of Columbus) and Land Studio (in Ohio City) generated conversation about linking Wildwood, Villa Angela and the Recreation Center to the beach. 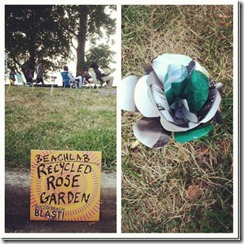 I was fortunate to have my work accepted as a feature in BeachLab. My recycled paper roses, manufactured for sale at this summer’s Collective Upcycle pop-up, made a return appearance in the “Recycled Rose Garden”, suggesting that plantings could spruce up patches of under-utilized lawn (left).

In addition to installing my artwork and assisting in the creation of the children’s playground on the plinth of a former amusement park ride, I spent the evening helping at BeachLab, crafting trash mobiles with local residents and Nicole of Plenty Underfoot. 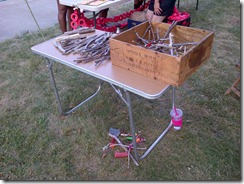 A crew of us made samples at Nicole’s studio last week and tirelessly scrubbed recyclable trash for beach goers to string onto mobiles of their own. You can read about our craft night on the Detroit Shoreway, here!  My mobile is pictured above and is resplendent with bottle caps, plastic toy pieces and a tampon applicator – all found by clean-up crews on the shores of Lake Erie! GROSS! GROSS! GROSS!

While my mobile may be pretty and the BLAST was truly a Blast, we should all remember that these two things wouldn’t need to exist if our beaches were clean. So please, don’t be a litter bug at the beach and don’t flush non-flushables at home. Simple steps can yield big results! 🙂

Read more about the Blast on CLESocial.