Above: my submission to the annual AIA Emerging Practitioners Exhibition in Washington DC. It was on view in Spring 2015.

The 2015 clean-up season is in full swing. Check out this Spring’s schedule by enlarging the postcard below. All participants will be titled “contributing artists” on “Plastic Perch” a HUGE trash sculpture (concept and build by me!) to be featured at the Great Lakes Science Center June 2015. 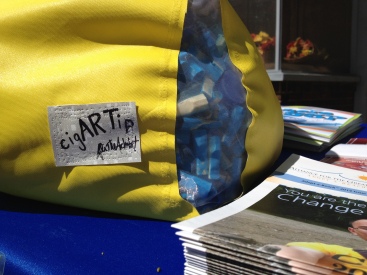 The Story: I vividly remember my first trip to Edgewater State Park (at the time, now owned and operated by the much improved Cleveland Metroparks). I couldn’t find a spot to put my towel, and not because the beach was crowded. Trash (mostly plastics that could have been easily recycled and diverted from the waste stream) littered the sand, and me, pushing around mounds of sand only unearthed more debris.

In 2013 alone 12,000 tips were collected by great Cleveland volunteers along the southern shoreline of Lake Erie. That is a disgusting statistic, Cleveland. Buy art, clean a beach, and raise awareness.

It was my first summer in Cleveland in 2011 and I was uneducated. I didn’t know of the combined sewer system or why thousands of people chose to smoke cigars with beige, plastic, non-degradable tips. I still don’t know the answer to the latter question, except that a Black and Mild cost $.99 at most corner stores. While it was difficult to ignore the sun-bleached tampon applicators mixed in with broken toys and bizarrely knotted pieces of driftwood, I know I blindly walked by hundreds of discarded cigar tips, lingering near storm drains, waiting to begin the perilous journey out to the Lake and then, like a boomerang, back to land.

If all tips were wooden, like this one picked from the streets of Boston, we’d be in better shape. So far, petitioning the companies that manufacture the cigars has not led to widespread change. Until then, we clean… and make ART!

I visited Lake Erie weekly in 2011, dangerously unaware of the trash piles (and the algae blooms), and it wasn’t until I met Stephen (a Lake Erie fanatic and cleaner-upper) -and when I discovered Euclid Beach and their team of Adopt-a-Beach volunteers –that I understood the problems and the solutions. I’m happy to report while I never was much of the problem, I am now very much part of the education and awareness efforts leading to a solution.

cigARTip art is a product of many inspirations and a real desire to educate the public.

And then there was ART: I absolutely love when a stranger comes to my booth at a community festival, having admired from afar a silver photo frame glinting in the sun. Without deference, that person will reach out to touch the frame than draw their hand back quickly. Something is not right. “What are these?”

In November 2012 I installed an exhibit in a vacant storefront in the Waterloo Arts District called “All That Glitters Is Trash”.  Hundreds of tips collected from the Fall’s beach clean-ups were bleached multiple rounds and spray painted silver and gold. Adhered to the windowpane, they mimicked garland in the best way possible.

A few months later, in February 2013, as a Board Member of Northeast Shores Development Corporation, Stephen needed to present a basket of “beach clean-up themed” items to a dinner fundraiser. In a stroke of genius, I insisted the unique geometry of the tips lend themselves perfectly to a rectangular form. cigARTip photoframes were born and since then a dozen or so have been sold or donated to a charitable drive.

These bleached and painted cigar tips have made their rounds, including arts shows and festivals on the Detroit Shoreway, in the St. Clair-Superior District, and of course, my home turf, Waterloo. 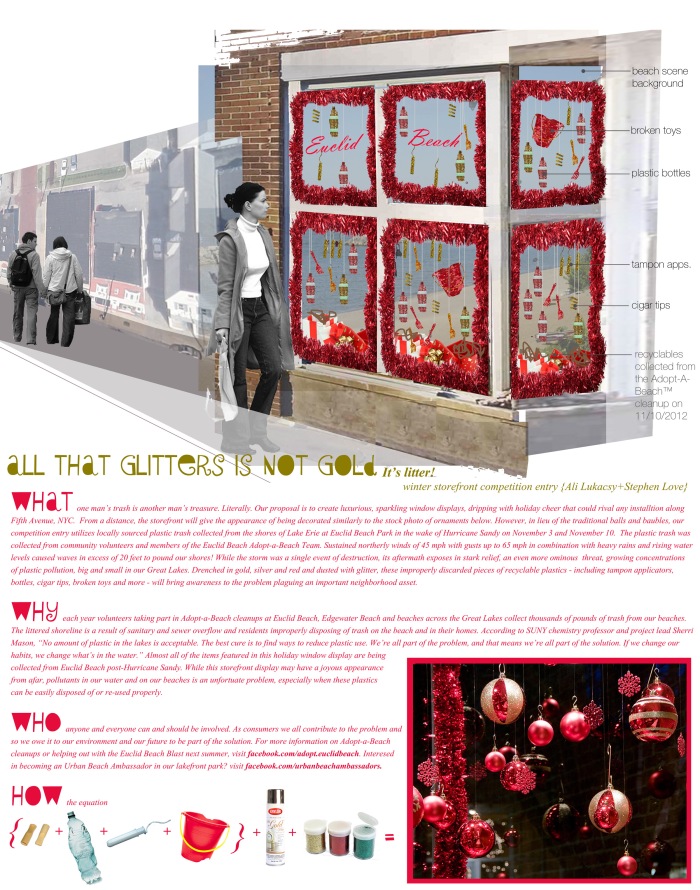 My second installation of tips was part of Rooms To Let: Cleveland, where suspended from a ceiling of upcycled plastic grocery bags they act to symbolize a rain of terror hitting our beaches much more aggressively than the average bystander may realize. In 2013 alone, over 12,000 tips

were picked up by volunteers in the Cleveland area. If we had more volunteers, more tips would be picked up. This, I have no doubt.

So what’s next, for me, the self-proclaimed most prolific cigar tip artist in Cleveland? Ohio? The USA? The World?

The prototype was developed in May 2014, was featured in an Adopt-A-Beach newsclip Cleveland’s FOX8 during a Barefoot Bubbly and Wine Cleanup, and can be spotted (ans sat upon!) around town this summer.

Using upcycled canvas from billboards, wallcoverings, and fabric I sew sturdy yet playful, ottoman-sized stools FILLED with cigar tips. As always, the tips are thoroughly cleaned and in the case of the prototype, painted as they are re-used from the Slavic Village installation. There are no smells, no grossness to leak out. But you will see them, through a fine knit mesh that keeps the tips bundled in the sack yet visible. The project doubles back to the importance of awareness and education – If the tips are not out of sight, they cannot be out of mind.

Help us spread the word! Attend beach cleanups this summer, grab a bucket designated for tips only, and get to picking! You can help me make art, and more importantly, make a difference.